Why Not? New Steps to Take

Today, I have done a number of things I have been planning for a long time. I turned one of my limited-edition books into a print-on-demand and then made it available on Kindle. I decided to begin serializing some of my books on this blog. Let me explain all of this.

The print-on-demand book is called Beo-Bunny. It is a spoof of Beatrix Potter’s story about Peter Rabbit. My take is that Peter goes out to fight McGregor, just as Beowulf went out to fight Grendel. After all, if McGregor and his wife ate Peter Rabbit’s father, as Beatrix Potter tells us, then like Grendel and his mother, they, too, must be ogres. The idea came to me just as I finished Beowulf, A Hero’s Tale Retold (Houghton Mifflin, 2007). I decided to have some fun after such a serious project. So, I painted pictures in the style of Beatrix Potter, and wrote a little story in Old English or Anglo-Saxon that was simple enough that anyone could read (but to make sure, I did provide a translation).

Here is the cover to the book. 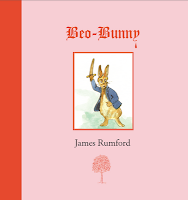 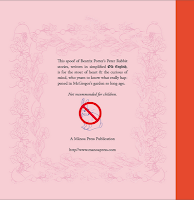 Here are the first few pages of the story. (To order a copy go to Amazon.com: http://www.amazon.com/s/ref=nb_sb_noss?url=search-alias%3Daps&field-keywords=Beo-bunny. The Kindle version should be ready by October 1, 2012) 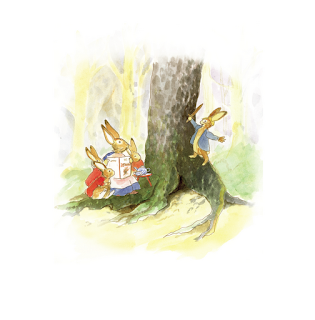 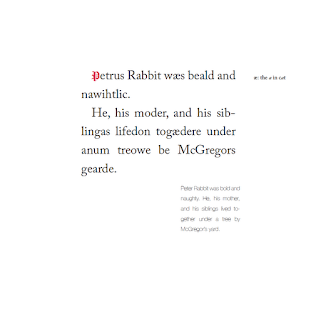 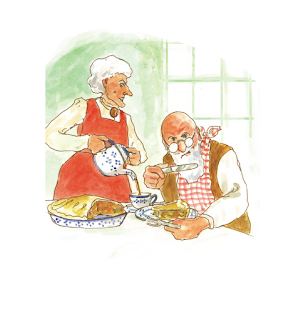 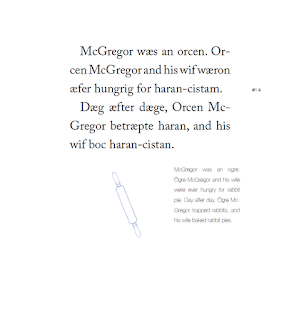 This was not the first time that I have done such a thing. For The Cloudmakers (Houghton Mifflin, 1996), I published a limited-edition book purporting to show that the story I wrote came from a Tang Dynasty manuscript (which was not true, of course). For Island-below-the-Star (Houghton Mifflin, 1998), I made up a story about a tattooed man from the Marquesas Islands. For Seeker of Knowledge (Houghton Mifflin, 2000), I wrote a twilight-zone story about how the Egyptian hieroglyphs were deciphered. I have other stories as well in various stages of completion. (For more about this, please go to http://www.manoapress.com)

I guess that all of this just goes to show how much concentration and energy goes into writing and illustrating a book. When a particular project is over, the energy has to be released. My release is to make fun of what I had been doing.

Someday, I’ll make all of the stories available as print-on-demand books, but for now, I’ll test the waters with Beo-Bunny. I’m also testing out Kindle. I don’t have a Kindle myself; so I don’t know how it will look. Kindle is not my first choice, but it is rather easy to do. With CreateSpace, where I did my print-on-demand book, they make converting a paper-edition into a digital edition a simple task. Reading through all of the contractual terms, the pricing modes, royalties, etc, was a bit of a chore, but, in the end, I decided that, since I could cancel at any time, why not give Kindle a try? I figure, too, that at $2.99 a copy, no one loses.

I did have a fleeting thought, as I was clicking off boxes in my Kindle application: all of the rules and regulations do not augur well for the artist/author/creator. Right now, royalties are great, but I have a feeling that such fantastic deals will not last long. Before we creators know it, we’ll be right back where we were last century with a 10% royalty, if we are lucky. I really do believe that the bean-counters, the Romney entrepreneurs of this world, will do their damnedest to stuff the genie back into the bottle. Here is one example: for Kindle, under certain circumstances, you have to pay to have your book digitally delivered. The price is per megabyte. This “freight charge” seems to me to be just the first step in making sure those guys get most of the money.

Now on to something new—serialized books.

Why not? Besides the occasional blog entry about some aspect of children’s book writing and illustrating, I thought it would be fun to post some of the books I have written. Why not let people enjoy them? After all, I have more stories in my drawer than I’ll ever get published or want to publish for money.

The first book I have chosen is a long one called Scrapbook. Scrapbook lies somewhere between a graphic novel and and word novel. As with a graphic novel, I am asking the reader to piece together the story from elements other than a traditional paragraph-on-paragraph story. But, instead of images, I am presenting artifacts: letters, postcards, clippings—the kinds of odds and ends found in a scrapbook that tell the story of a person’s life.

The story centers around Rozelle G. Hodges, an Indiana Jane, if you will, who went in search of the fantastic beasts, peoples, and plants described in John Mandeville’s medieval best seller, a travel book describing the known world (See more at http://en.wikipedia.org/wiki/John_Mandeville). Framing the story of Rozelle G. Hodges is that of Kenneth Dore, an eighteen year old who has just lost his parents and his grandmother. How the lives of Dore and Hodges are interwoven is the pith of this story, and I hope that it will be as much fun for you to read as it was for me to write and illustrate.

My plan is to post a portion of this story every few weeks. Happy reading . . . and let me know what you think. I also hope that the format below is legible. [Click on each image to enlarge.] 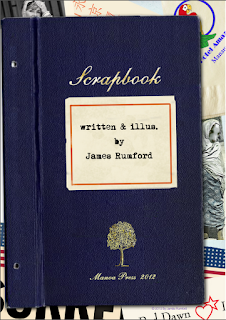 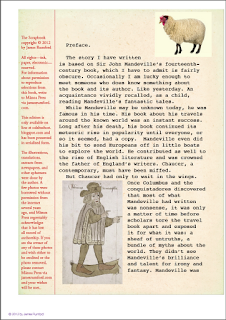 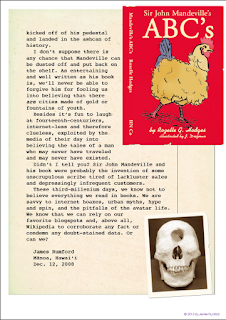 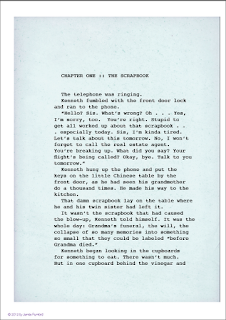 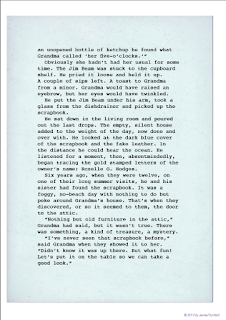 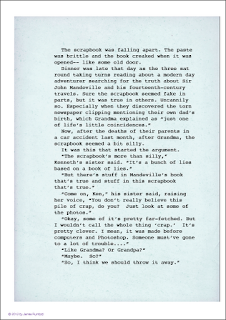 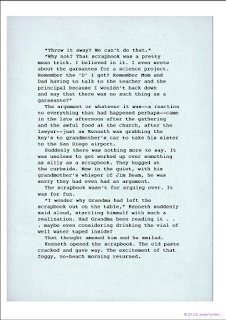 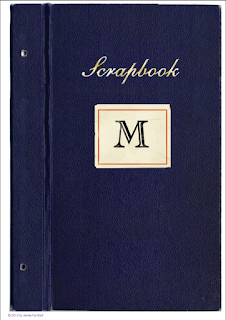 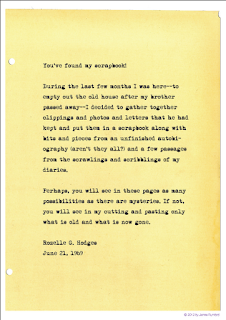 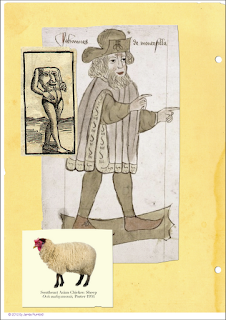 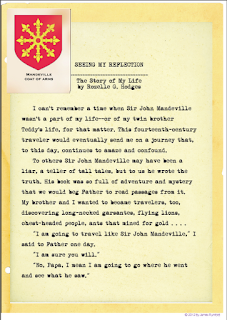 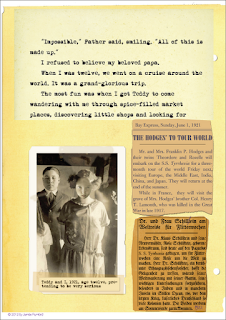 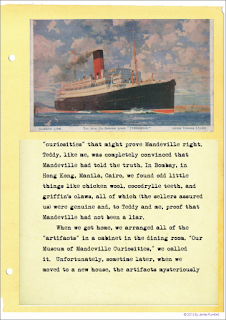 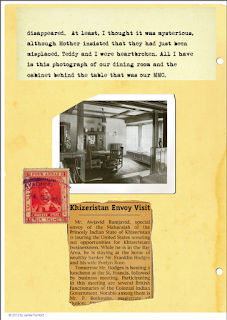 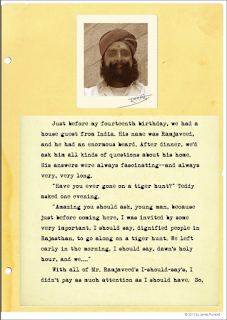 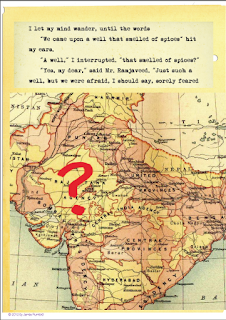 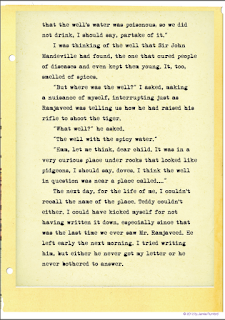 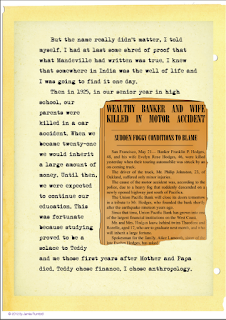 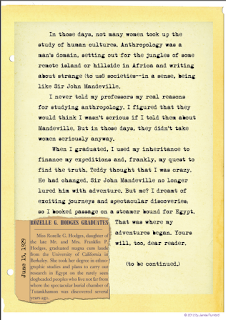 But Didn’t Gutenberg Have a Beard? 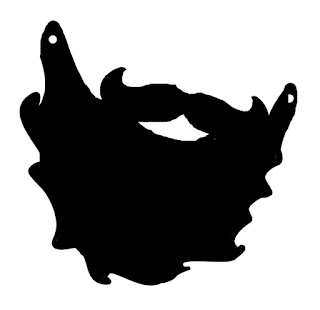 Sound business advice seems to be: give’em what they want and you’ll make money. This is sound advice in publishing as well. Print books people want to read and they’ll buy them. But along these same lines runs a pernicious argument—if arguments can be pernicious: write what people expect to read and you’ll sell books.
If a book contains information that runs counter to what people think they know, the book runs the risk of being rejected, if not scorned. This doesn’t happen so much with books for adults. The author uses his skill to craft arguments to overcome the reading public’s resistance. But in children’s books, especially picture books, there isn’t room, time, or the logical tools at hand to change people’s minds.
Besides children’s books aren’t at the forefront of human knowledge. They are not supposed to present new ideas or theories. They’re supposed to be pre-chewed adult ideas that a child can easily digest. They’re supposed to be a simple version of what an adult already knows so that the adult will have little trouble fending off the “why’s” of little readers.
If a children’s book runs against the common flow of knowledge, the book becomes suspect and the author’s integrity is questioned. Sure, there are things in children’s books that need to be questioned. There are even mistakes, as there are in all books. Sometimes these mistakes are accidental; sometimes they are due to laziness on the part of editors. All are regrettable. But I am not talking about questioning as a part of healthy reading. No, I am talking about not questioning, of dismissing the book because it seems to run counter to what the adult reader thinks he or she knows.
I remember with my book about Champollion’s decipherment of Ancient Egyptian, Seeker of Knowledge, a museum shop refused to carry the book because the hieroglyph for elephant looked too much like an Indian elephant than it did an African one. Turns out that North Africa had its own species of elephant at the time and what is more, it is reported that one of the pharaohs had purchased elephants from India!  Seeker of Knowledge also raised eyebrows because it did not present the story in the usual fashion. Common knowledge is that Champollion used the Rosetta stone to decipher Egyptian. While this is true, it is only partially true. It always bothered me, when I was a kid that the books I read stopped after they explained how Champollion decoded some of the letters of the Egyptian alphabet. What I wanted to know was: how did he decode all of the pictures? My book was a start, an attempt at answering that question for the little Jimmy Rumford’s of this world.
Besides, who wants to rehash old information and pre-chew it for kids? Why not present new ideas, new angles, perhaps new research?  Why not make Beowulf [Beowulf, a Hero’s Tale Retold] look like the enfeebled, battle-scarred, unhero-like septuagenarian that he was ? 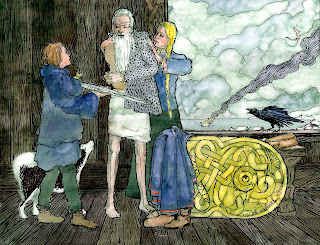 Why not tie in the myth of Cadmus [There’s a Monster in the Alphabet] with the way our letters are ordered in our alphabet ? Why not say in my Island-below-the-Star and Dog-of-the-Sea-Waves, that Polynesians loved, above all else, to explore their ocean world instead of reinforcing the James Michener myth of fleeing Tahiti like pilgrims fleeing England for America ? Why not make Gutenberg clean-shaven, even though all the books I have ever seen show him with a full Mosaic beard?
This last might need some explanation, and so, in my book (soon to be out: September 18) From the Good Mountain, perhaps to ward off the wearied reviewer, I told how, according to all of the fifteenth-century miniatures and portraits I have seen, men of Gutenberg’s class did not wear beards and that the commonly reproduced portrait of him was done about a hundred years after he had died—at a time when beards were fashionable.  I even revisited the question of whether nor not Gutenberg had a beard in my companion guide to the children’s book. Here are two pages from that guide[From the Good Mountain: a companion guide for adults and children], which I made available on Amazon.com just yesterday. 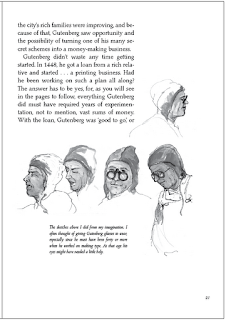 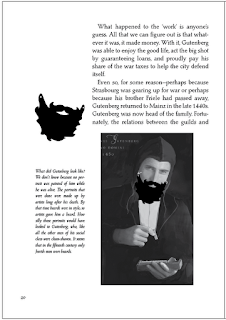 As an author, I find it always a little chancy to go against what I think people want to hear, especially if I want people to buy the books I write. So, I am back where I started, ignoring sound business advice. To me, it is always better to give people what they need to hear.
Posted by James Rumford at 1:20 PM No comments: