Just a few days ago, I finished a project that had consumed me these past three months. At the end of April I realized that I had a lot more to say about Johannes Gutenberg and bookmaking in the fifteenth century than I could ever say in my children’s book, From the Good Mountain: How Gutenberg Changed the World, which is due out September 18 of this year. 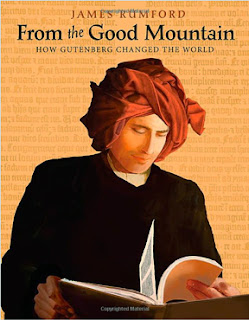 At first I thought that I’d write a curriculum guide for the children’s book. But a week or so into it, I realized that my ‘guide’ was going to be much more than that. Instead of a curriculum guide it blossomed into a companion guide as ten pages became twenty then eighty then one hundred fifty. This wasn’t going to be a book for teachers. It was for anyone, twelve years old and up who wanted to find out what we do know about Gutenberg’s life and the details of making late medieval books. I began sketching out in my head the chapters I would write and the diagrams I would have to draw. The result: 12 chapters and 150 drawings and diagrams that would cover paper making, tanning leather, ink making, type casting, press building, typesetting, printing, illumination, and bookbinding. 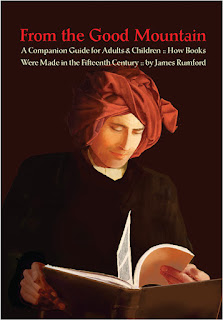 Here are some pages from the companion guide. 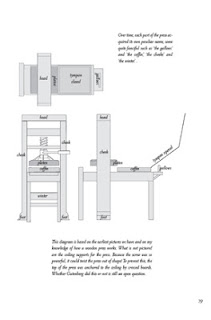 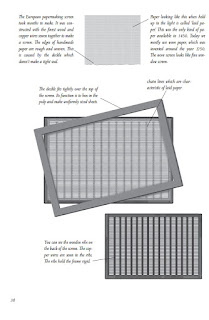 To find out more click here. To read the last chapter in the companion guide, click here.

I decided early on to make this a print-on-demand book in black and white and use CreateSpace.com to make this happen. As I write this, the book is in the proofing stage, and when the proof arrives this week, I’ll have the ‘fun’ of circling in red the many, many mistakes not just in the text but the captions to the diagrams as well as the six-page index.

I sometimes get the feeling, especially with some librarians and teachers that they want books that will not raise questions but answer them, especially for little Johnny, who needs to get his report done, or little Suzy, who is forced to read about something for which she has little interest. Books to these educators are pills. If they can only find the right one to stop the kids from asking questions.

I, like most of the authors that I know, seek to write books for kids with questions. We want them to look elsewhere. Our books are not the end of the line; they’re maps leading to destinations unimaginable.

I suppose that in times past—way past—when there were fewer books, a book had to be as complete as possible. But this is no longer true today. Hooked up with the internet a book becomes borderless, infinite. If a book doesn’t lead a child to the internet, in my view, that book has failed. If teachers or parents haven’t taught the child that the internet is more than games and facebook and who-knows-what-else, than they have failed.

A reviewer recently wrote that he or she thought that From the Good Mountain was weak because it didn’t have a glossary and that the list of key words that I put at the end of the book specifically for the reader to find out more on the internet was “frail.” How old was this reviewer? Obviously old enough to be behind the times. With e-books, there is no need for lexile analyses. If the kid doesn’t know the word, the ipad or the kindle will look it up for him, even pronounce it for him. If the kid can’t picture what’s being written, one tap will carry him to Wikipedia or the internet. How then can one book be considered deficient or frail or weak? If the book is half way decent, it becomes truly a portal to the world.

In the old days, teachers and librarians used to use such metaphors: portals, gateways, road maps, because that is what they wanted every child to believe. Some children did; most didn’t because to make portals happen before the internet meant going to the library and hauling home a ton of books and becoming the most feared of creatures: the nerd. Today, truly, as I said, books are opening doors unimaginable. Instead of the keys being at the local branch library, they are right in the child’s hand.

Posted by James Rumford at 2:10 PM No comments: